Thursday, January 30, 2020
When the Filipino masses were mobilizing towards Malacañang, the Marcoses had to evade. Having jewelry at her reach and diapers of her grandchild in a bag, Imelda swiftly slipped some diamonds into the diapers before finally fleeing through the helicopter. 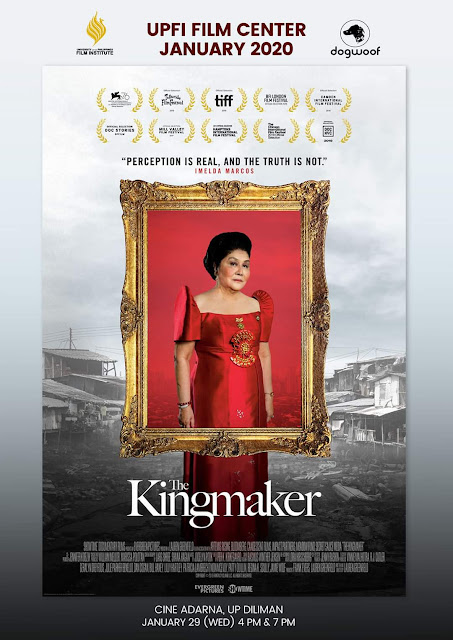 That saved them from the coming persecution. Or at least, that’s what she paid for the lawyers.

The Kingmaker, a 2019 documentary film by the American Filmmaker Lauren Greenfield, presents a fair and safe exposition of the extravagant, the insane, and the Imeldific history of the Marcoses. Aside from new video footage from the Martial Law era, exclusive access to Imelda’s splendor, and compelling testimonials from political figures, the film did not offer anything else but a renewal of rage. What Kingmaker achieves is the reminder to Filipinos about the atrocities, the excesses, and the extreme narratives the Marcoses committed and perpetuated which are all continually manifested today.


It’s a Filipino story told by a non-Filipino. And for better or for worse, Greenfield evidently has done her homework well. Started working on the documentary in 2014 with an initial and incomplete perception, she is able to link, situate, and reflect the past regime to the present political climate. The film chronicles events from the relationship of Ferdinand Marcos and Imelda Romualdez to their political ascendancy in the country. But the film did not limit itself from the historical and political; Kingmaker implicates the construction of a politician and a budding politician, and of a state and nation-building.

Although the film almost celebrated Imelda (which can be misconstrued if it wasn’t for the careful editing), it is able to balance the exhibition through gathering testimonials from the “truth-tellers” and juxtapose them with the 'unreliable narrative' of Imelda herself.

The documentary, despite being patterned in the conventional Western filmmaking, does not have a narrator but relevant people expressing their minds with civility and sometimes arrogance. Ferdinand Marcos’ and Benigno Aquino’s old speeches and popular recordings, Bongbong Marcos’ and Noynoy Aquino’s interviews, Marcos’ close friends and Martial Law victims build the film’s narration which, to an extent, makes it dangerous. The insertion of Cory Aquino’s old interviews, Leni Robredo’s responses, and Andy Baustista’s career timeline over the film production contextually contribute more to the already apparent contrast and purposeful opposition of narratives. L. Greenfield lets the audience examine their moral compass and leaves them deciding whether to consume her film as crucial knowledge of the time or to reduce it as old information exposed to and made for foreign audiences.

“The only more powerful than King is the Kingmaker.”


And the kingmaker is a woman – a wife and a mother. The kingmaker is Imelda.
Her delusions are her strengths. Her money is just an accessory.
Imelda wears red and suddenly, the blood of the past reflects.
She confuses her mother with money, gives one thousand peso bills as candies.
She grooms her son to be like her and her husband – a ‘political animal’ too insatiable to even accept defeat.

But I thought history is written by victors. Why do Filipinos confuse and forget what is written and what had truly happened? This just means that even the Marcoses didn’t win, they are actually yet to lose since Bongbong lost the vice presidency (2016), but his sister Imee later won the senate.

We may have succeeded after crucially and critically fighting the injustices and inhumanity for years under the dark regime, but we have lost our social responsibility to uphold the truth of the past to the present, haven’t we? Yes, the force is too strong but that didn’t stop the People Power. Today we have a Marcos in a different name. We have the truth of the present, but the reality seems to bring back the past.

For its merit, Kingmaker is essentially informative. The risk, however, is when educators champion it, manipulators will also do their job. The film did not paint Imelda Imeldific – for it is already known. The film did practice fairness, and it’s this fairness in getting both sides that weakens the being of such documentary.

Imbibed with colorful but grim Philippine politics, the Kingmaker misses the corrective stance to combat historical revisionism which it itself tries to challenge.

"Perception is real, and the truth is not."

When the film is finally released widely, cinema cannot afford discursive mediation. Not always. The film premiere in the Philippines was mediated by the academe, institutions for progress – and that is sadly a privilege. Once Kingmaker becomes available beyond international film festivals, its own existence might be regrettable.

Popular posts from this blog 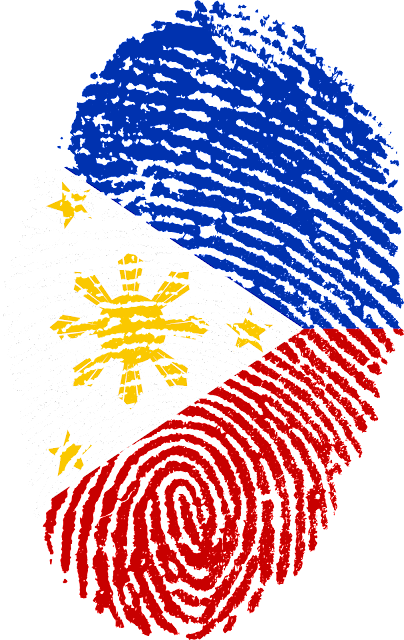 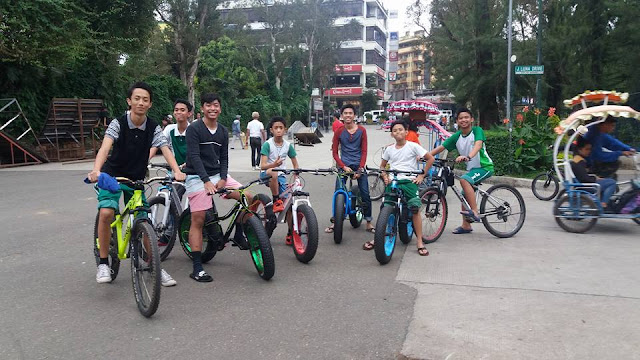 The Historical Origin and Cultural Implications of Bañamos Festival of Los Baños, Laguna 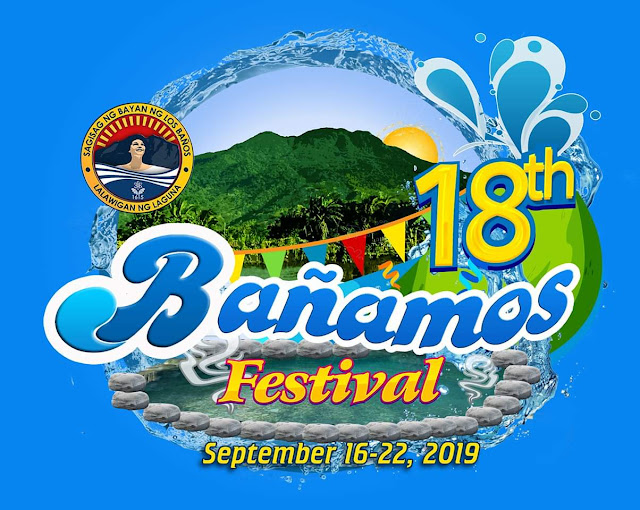 The month is September and as a child, my grandmother would bring me to the town plaza to watch the Balye sa Kalye , the most awaited event in Bañamos festival of our municipality. This goes every year with my grandma until I grew older to watch other events of the festival by myself or with my friends. The festival was just colors and music, an entertainment, and an annual celebration until I gained the consciousness to wonder its origin and curiosity to ask its implications to the local culture, which set the rationale of this paper. Origin             The festival’s name Bañamos, which is a Spanish term meaning “we bathe”, is ascribed to the name of the municipality, Los Baños meaning “the baths”. This is due to the fact that the founding of Los Baños goes back to the Spanish colonization. In the late 16 th century, a canonical mission in the lakeshore towns of Laguna led the Franciscans to come by the hot springs of barrio Mainit , only a visita then (a chapel under a par
Read more 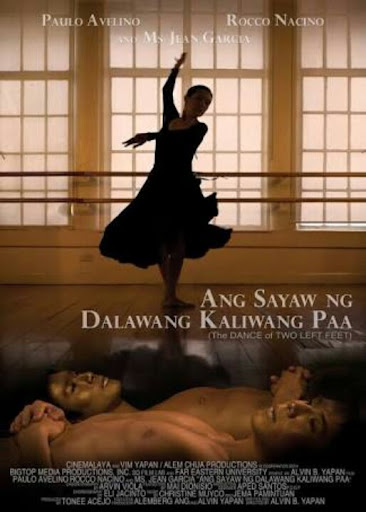 Profound, complex, and beautiful.   The 2011 drama film of Alvin Yapan is an acclaimed motion picture that uses dance, poetry, and emotion to symbolize a deeper meaning about gender, sexuality, and character. The narrative involves a love triangle between Marlon (Paulo Avelino), Karen (Jean Garcia), and Dennis (Rocco Nacino). Dennis has started to invest emotionally on Marlon upon teaching him to dance to impress their literature teacher/dance instructor whom the latter is infatuated with. The film, however, does not focus solely on the romance of the characters but with the meaning behind every delivered poem, every dance routine, and every subtle projection of emotions through visual portrayal and effective sound. Ang Sayaw ng Dalawang Kaliwang Paa is wisely created as there’s more than the movie plot – there are reflections of gender sensitivity and fluidity, paradoxical representation of sexuality, and philosophical insights about feminism, affection, and devotion.  In the c
Read more 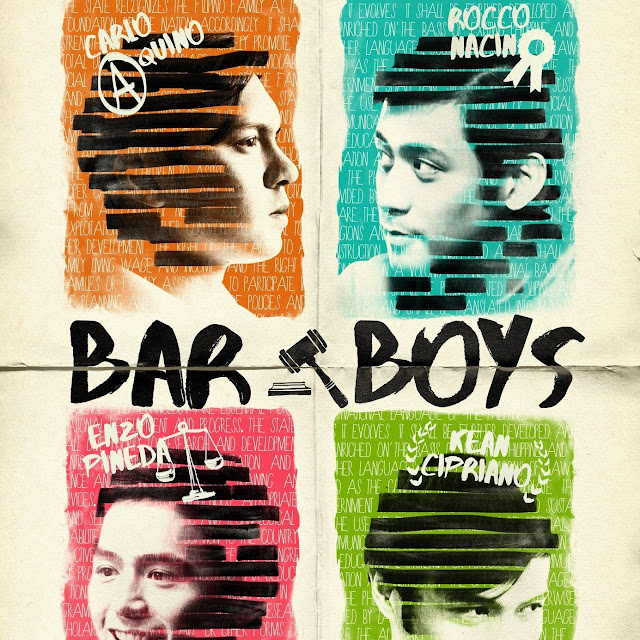 One of my picks among Pista ng Pelikulang Pilipino (PPP) movie entries is Bar Boys with a synopsis of "The misadventures of three young men who try their luck in the college of law. As their friendship, families, relationships and convictions are brought to breaking point, they must keep their heads and emotions together as they prepare for the big day." I watched the movie with my friend with no particular expectation. Fortunately, having watched the film, I suddenly asked myself "how can it exceed my expectation if I didn't set any at all?" because it just happens that it exceeded my expectation as I don't honestly usually watch Filipino movies. The theme of the movie is about the struggles of being a law student dealing with the challenges of studying and passing, dealing with college professors (who each have distinct personality) and their respective subjects, and dealing with the relationships one has in his family, friends, and significant others
Read more 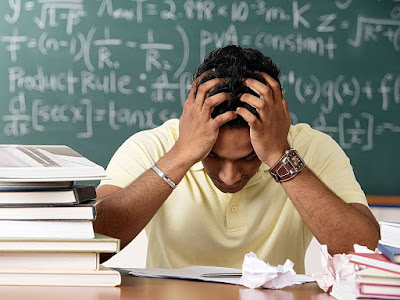 This blog just reached 2 years old (created in April 2017).
Having almost a total of 17,000 reads/views from my literary works (both old pieces and written for the blog), personal stories, and accounts of my journey as THE BOY WHO STUTTERS, I honestly did not expect such reach in the span of 2 years.
From publishing my old literary as a high school student to writing random essays for the blog, from sharing my personal experiences as a teenager to telling my on-going journey in college, from having 8-10 posts per month to only 2-5 posts, THE BOY WHO STUTTERS will continue to serve as a personal blog, an archive of my literary works, and a depiction of a stutterer's life.
Do SUBSCRIBE if you want to be notified (via email) when a new post is published!

This is my personal blog. All views and opinions expressed here solely reflect the viewpoint of the blogger. All literary works are owned and written by the writer himself unless otherwise stated. Don't hesitate to speak your mind by leaving a comment, to share any post you find worth sharing, and to check my blog for latest posts.
If you're new to here, WELCOME! If you've been reading since then, THANK YOU!
Happy Reading!